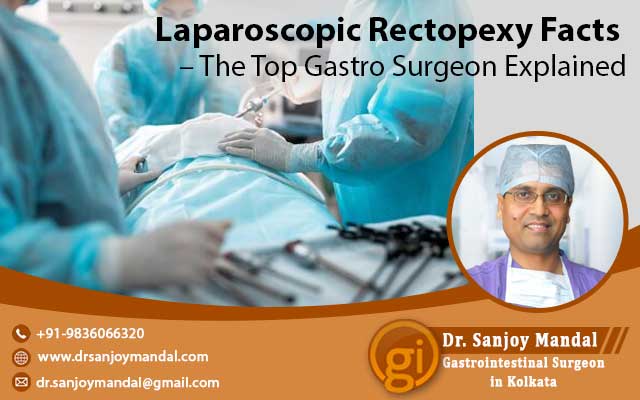 What is laparoscopic ventral rectopexy

Laparoscopic surgery is sometimes known as “keyhole” surgery because it is performed through a succession of small cuts (1cm or less) in the belly rather than a large cut (tummy). The procedure is carried out while you are sleeping under anaesthesia. The lower part of the intestine (rectum) is removed from the back wall of the vagina (in females) or the bladder and prostate (in men) during the operation, and a mesh is stitched to the front of the rectum. The mesh (a sterile sheet of netting) might be synthetic (produced from non-natural materials) or biological (formed from bodily tissues). According to the laparoscopic rectal prolapse surgeon, the mesh is then secured to the sacrum bone at the back of the pelvis with specific tacks or stitches.

When is laparoscopic ventral rectopexy performed

Patients with ‘external rectal prolapse’ (bowel sticking out of the anus) is one of the most common reasons for the operation. Internal prolapse, often known as “intussusception,” is a newer reason for surgery. When the rectum prolapses internally in the rectum without going out of the anus, this is known as rectus prolapse. This could lead to a condition known as ‘obstructed defecation syndrome’ (ODS). These patients may benefit from a laparoscopic ventral rectopexy (LVR).

How long does it take to recover from LVR surgery

Patients usually wake up with a catheter (tube) in their bladder and a drip in their arm after surgery. Before the operation, your anaesthetist will talk to you about pain management. Your catheter will be removed and your drip will usually be turned off the first morning after surgery. It will be possible for you to eat and drink. After surgery, patients are usually kept in the hospital for one night. Dr. Sanjoy Mandal, who is among the top 10 laparoscopic gastrointestinal surgeons in Kolkata, doesn’t normally wait for your bowels to open following surgery. You’ll be sent home with a two-week supply of laxatives. It is critical that you do not become constipated in the weeks following surgery, as this will cause pain.

If you find laxatives to be useful, you can use those for up to six weeks after surgery. You may be able to drive after two weeks and return to work after 2-4 weeks, but lifting should be avoided for at least six weeks.

What are the surgical outcomes

As per the best laparoscopic surgeon, the procedure has a very low recurrence rate in individuals with external prolapse (i.e. the prolapse coming back). Internal prolapse patients who are candidates for surgery can also expect positive outcomes. Around 4 out of 5 patients with ODS will see a considerable improvement in their symptoms. Incontinence caused by internal prolapse will improve in a comparable percentage of patients.

Is ventral mesh rectopexy a better option than other prolapse procedures

Because this is a keyhole procedure, you will have less scars and experience less pain. Dr. Sanjoy Mandal utilizes mesh because it appears to give a more long-lasting outcome. Importantly, he simply dissects the rectum down its front (“ventral” or “anterior”) side, protecting the vital pelvic nerves, which is why this procedure does not induce constipation. When compared to surgeries performed through the anus, prolapse rarely returns after laparoscopic rectopexy, says the gastroenterology surgeon in Kolkata.