Everything You should Know about GIST – An Onco Surgeon Explained 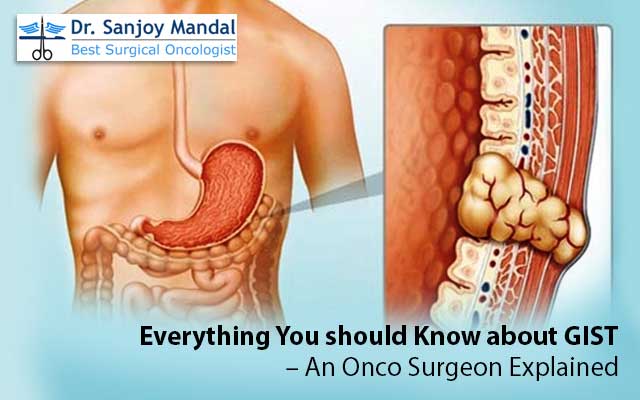 Gastrointestinal Stromal Tumours (commonly called GIST) are cancerous cells that develop in the lining of the gastrointestinal (GI) or digestive system. The Interstitial Cells of Cajal (or ICCs) are specialised cells that give rise to malignancies. This type of tumour is relatively uncommon. GISTs are tiny tumours smaller than peanuts, which develop in the supportive tissues and are classified as sarcomas. According to Dr. Sanjoy Mandal, the well-known GI onco surgeon in Kolkata, GIST tumours are typically found in the stomach, although they can also be found in the duodenum and small intestine, oesophagus, colon, and rectum. GIST tumours are not the same as GI tract malignancies. GIST is a type of cancer that can be malignant or non-cancerous.

They’re often discovered when looking for underlying health problems. Look for signs and symptoms such as

• Swelling or pain in the abdomen

• Stool or vomit with blood

GISTs are caused by a variety of factors. GIST is caused by no environmental or behavioural variables. They occur at random and have no known reason. Some studies, however, have shown that they are mostly linked to a mutation in the KIT gene protein, says the best cancer surgeon in Kolkata.

• Age: People between the ages of 50 and 70 are more susceptible, whereas those under the age of 40 are uncommon. Only a small fraction of kids and adolescents are impacted.

• Genetic syndromes: In a small number of individuals, genetic factors can increase the risk of developing a GIST tumour.

• Gender: Men are more susceptible to having GISTs than women.

Treatment should be based on a thorough examination of the site and the extent to which it has spread to other organs. GISTs can become dangerous if they expand beyond their original place. The stage of cancer refers to how far it has spread, and it might be one, two, three, or four. A higher number indicates a higher spread. Your doctor will determine the best treatment option for you based on the stage you are in.

Surgery is the mainstay of treatment, for curative intent. If the tumour has not spread, it can be removed either open surgery or minimally invasive surgery. To lessen the likelihood of GIST recurrence, surgeons can additionally remove an area of normal tissue close to it. GIST tumours that may be safely removed through surgery are known as resectable tumours, whereas others are known as unresectable tumours. Even in patients where the tumour has spread surgery may still be indicated to remove as much bulk of the tumour as possible so that subsequent adjuvant treatment can be given in a more effective way.

Radiation therapy and Targeted therapy are not very effective in this type of tumours. Chemotherapy  which in this case involves use of oral medication which includes medicines like Imatinib and Sunitinib etc. are effective for treatment in advance cases to helping shrink the tumour so that subsequent surgical treatment can be carried out for curative intent. Oral chemotherapy treatment is also given for large advanced tumours which have undergone surgical resection to prevent future recurrence.

Follow-up appointments are critical to ensuring that you remain cancer-free. There is no method to prevent it because the cause is unknown. Maintain a healthy lifestyle that includes a diet rich in fruits and vegetables, as well as frequent exercise, to lower your chances of contracting it, advises the cancer specialist in Kolkata. Any tumour investigation and treatment can be highly upsetting. For their physical, emotional, and social requirements, the patients require supportive care.