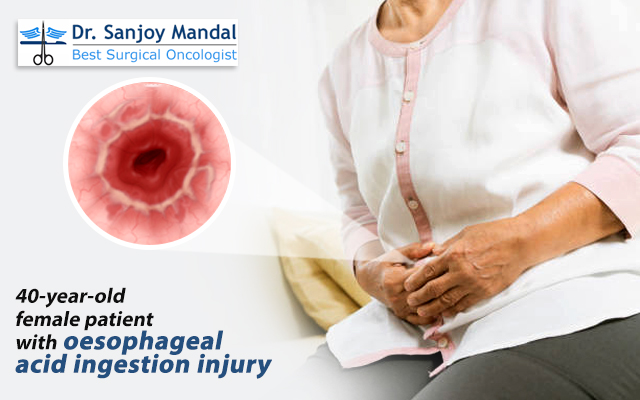 Initial evaluation of the illness:

A 40-year old lady came to the clinic with a complex condition. She was detected with a severe injury in her food pipe as a result of suicidal ingestion of acid, which completely damaged her oesophagus (food pipe). She was experiencing great difficulty in swallowing food as well as her own saliva.

Initially, she consulted at many reputed hospitals in Chennai and Hyderabad where the doctors diagnosed and declared that corrective surgery in the oesophagus was impossible due to the severe injury to the food pipe.
Hence, the doctors placed a feeding tube into her stomach which required feeding every two hours throughout the day. Moreover, she was required to carry a sputum pot with her to spit out her saliva.

Soon afterwards, the feeding tube also started leaking and needed a change. At this point, she came to Dr. Sanjoy Mandal, to get her tube changed.

Dr. Sanjoy Mandal carefully examined her condition and recommended corrective surgery instead of changing the tube. Initially, the patient’s family was hesitant and unsure about the effectiveness of the surgery as the best doctors in Chennai and Hyderabad had previously refused to perform any surgery and suggested a feeding tube as the best treatment option for her.

However, after a thorough consultation with Dr. Mandal, the patient agreed to undergo the complex surgery. It was an eight hour long surgical procedure where a portion of the large intestine was used to bypass her food pipe. During the procedure, Dr. Mandal placed a temporary pipe in the respiratory tract to help her in breathing and prevent the food from getting aspirated into the respiratory tract.

Post-surgery, the patient underwent post-operative rehabilitation for a rigorous period of two months. After this, she was able to recover fully and swallow all types of food. Moreover, the temporary pipe in the respiratory tract was also removed and gradually she started living a normal life.

This is one of the complicated cases solved by Dr. Sanjoy Mandal, making him the best GI surgeon in Kolkata.