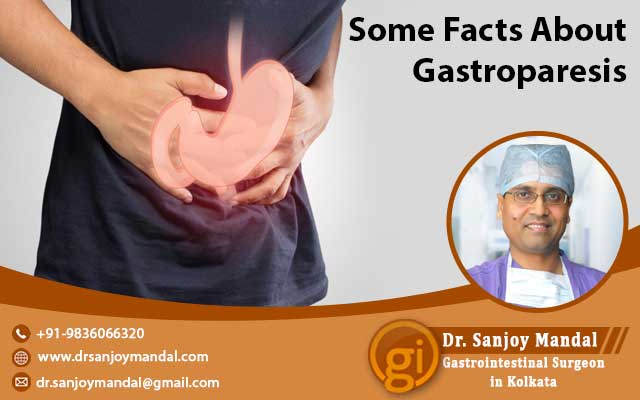 Gastroparesis is a medical term that literally means “stomach paralysis.” Gastroparesis is a condition in which the stomach’s motility is either faulty or non-existent. A healthy stomach produces contractions that help to compress ingested food and push it farther into the small intestine, where it is digested and nutrients are absorbed. This function of the stomach is lost in gastroparesis, and the stomach is unable to contract correctly, obstructing food digestion and propulsion into the small intestine even when there is no mechanical obstruction, says Dr. Sanjoy Mandal who is considered to be the best gastro surgeon in Kolkata.

Gastroparesis can be caused by a variety of factors. One of the most common causes is diabetes. Viral infections, postsurgical, drug-induced hypothyroidism, neuromuscular illnesses, and idiopathic (unknown) reasons are some of the other causes. Gastroparesis is more common in diabetics who have had the disease for more than five years, with about 10% -18% of the individuals experiencing it. According to the gastrointestinal surgeon in Kolkata, antidepressants and calcium channel blockers, which are typical antihypertensive medicines, are common pharmaceuticals that cause gastroparesis. Gastroparesis must also be distinguished from functional dyspepsia, which presents similarly in patients.

What are the Symptoms of Gastroparesis

Bloating, nausea, early fullness or satiety while eating, belching, and epigastric pain are some of the symptoms of gastroparesis. Following the consumption of fatty or high-fibre foods, these symptoms become more acute. It is also possible to have nausea and weight loss. It is also typical to vomit undigested food several hours after eating.

How is Gastroparesis Diagnosed

Upper GI endoscopy is used to diagnose ulcers, infections, cancer, and other abnormalities in the stomach by introducing a thin flexible tube from the mouth into the stomach. To rule out any obstruction in the GI tract, a CT Abdomen is sometimes needed. To confirm delayed stomach emptying, a gastric emptying study is conducted, the gastroenterologist surgeon in Kolkata explains.

How is Gastroparesis Treated

Dietary adjustment is the first step in treatment, and patients are encouraged to follow a low-fat, high-nondigestible-fibre diet. Vitamin supplements and hydration are recommended. Patients are encouraged to abstain from smoking, using alcohol, and consuming carbonated beverages. Controlling blood glucose levels is recommended for diabetic patients. The culprit medicine must be stopped in patients with drug-induced gastroparesis. According to the top gastro surgeon in Kolkata, few drugs that boost gastric motility are added. Surgical or endoscopic procedures are required in some patients with advanced illness. Exercise is also advised on a regular basis.