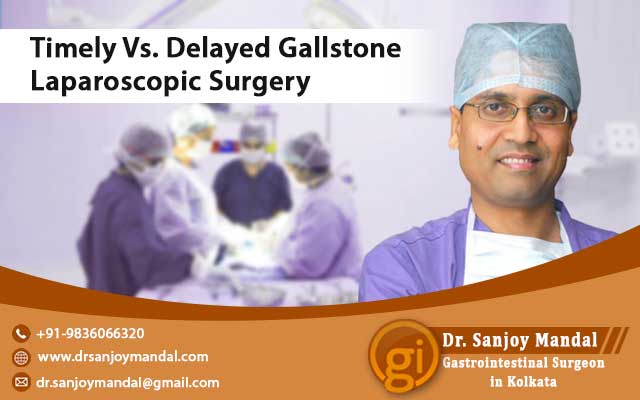 We have all come across the term ‘gallstone’ at some point in our lives. Gallstones or gallbladder stones, as the name suggests, are solid particles formed in the gallbladder due to excessive production of bilirubin and cholesterol in the liver. Earlier, the treatment of gallbladder stones involved traditional open surgeries, which extended the patient’s hospitalization as well as recovery time. Medically termed as laparoscopic cholecystectomy, the lap gallbladder surgery is a minimally invasive procedure that has now become immensely popular with gallbladder laparoscopic surgeons in Kolkata. By making some minor incisions, surgeons can now remove more than one gallstone within a couple of hours.

People with gallstones might not feel any discomfort in the initial stages, but when left untreated, gallstones cause complications such as intense abdominal pain, gallbladder inflammation, and jaundice. The early signs of gallbladder stones, as explained by Dr. Sanjoy Mandal who is an experienced laparoscopic surgeon in Kolkata, include high fever, abdominal pain, and yellowing of the eyes and skin.

The laparoscopic removal of gallstones is the most acceptable treatment method used today, the reasons of which are pretty clear. It is safe, cost-effective, and allows you to return to normal life within a few days after the operation. Dr. Mandal would recommend an early laparoscopic cholecystectomy after confirming that the gallbladder inflammation does not block the optimal view during operation.

According to the best gallbladder lap surgeon in Kolkata, the first 3-4 days after diagnosis is the ideal time for laparoscopic gallstone surgery. However, the best time to treat acute cholecystitis usually varies with inflammation. In patients with acute cholecystitis, the treatment is often delayed to make sure the inflammation subsides. This delay, however, can cause several complications associated with the gallbladder and liver of patients. Let us focus on some of the advantages that early laparoscopic cholecystectomy (ELC) has over the delayed method.

Pregnant women, obese people, those who are taking cholesterol-lowering medicines, and people over 60 are at increased risks of having gallstones. If you are among them, make sure to be wary of symptoms like increased heart rate, sudden fever, nausea, confusion, and fatigue. If any of the symptoms occur, you should visit a gallbladder laparoscopic doctor in Kolkata immediately.