Understanding Pancreas Cancer and Laparoscopic Approach Of Treating It 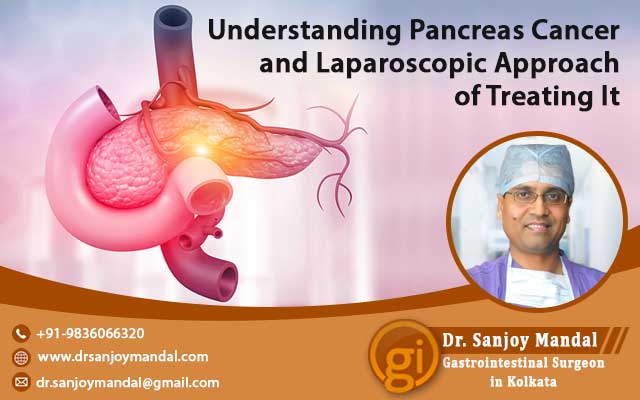 The pancreas, a tiny organ in the upper abdomen, plays a crucial role in the digestive system. Pancreas releases digestive enzymes which helps in digestion and also has a role to play in the balancing of hormones and sugar levels in our body. So, you can well understand that if this organ gets affected by abnormal cell growth (malignancy) in it’s tissues how difficult it gets.

According to the pancreas cancer surgeons, there are other associated organs near the pancreas which may also get affected if the cancer spreads from the pancreas. Pancreas cancer basically occurs as a result of unhealthy DNA mutations in the pancreas. There are certain factors, however, which can increase your susceptibility to the same. The most common risk factors for pancreatic cancer include the following:
• Uncontrolled smoking and consumption of alcohol
• High blood sugar levels
• Pancreatitis (a condition marked by the chronic infection of the pancreas)
• Age (90% of the people are over 55 years)
• Gender (men are more susceptible to pancreatic cancer than women)
• Family history of pancreatic cancer
• Obesity

As in some other cancers, the symptoms of pancreatic cancer usually go undetected in the early stages and these become noticeable only when the disease has advanced. If any of the above-mentioned symptoms continues for long, he/she should see a doctor who will prescribe certain tests and screenings. Some of the common diagnostic techniques suggested by Dr. Sanjay Mandal specialising in laparoscopic pancreas surgery in Kolkata are as under:
• Physical Examination
• CT Scan
• MRI
• Ultrasound
• PET Scan

After diagnosis, the cancer treatment depends on the stage it has been diagnosed. Generally it has four stages starting from I to IV.
In most cases pancreas surgery is the best option available for both the doctors and the patients. Previously, while most of pancreatic surgery was done by open laparotomy, but now laparoscopic surgery is gaining popularity day by day. Since laparoscopic surgery involves smaller incisions, lesser scars and faster healing.
Pancreatic cancer treatment is much easier in the early stages, however, as the disease advances, it gives rise to more complications making the treatment a little difficult.By admin|February 23rd, 2021|Laparoscopic Surgery|0 Comments